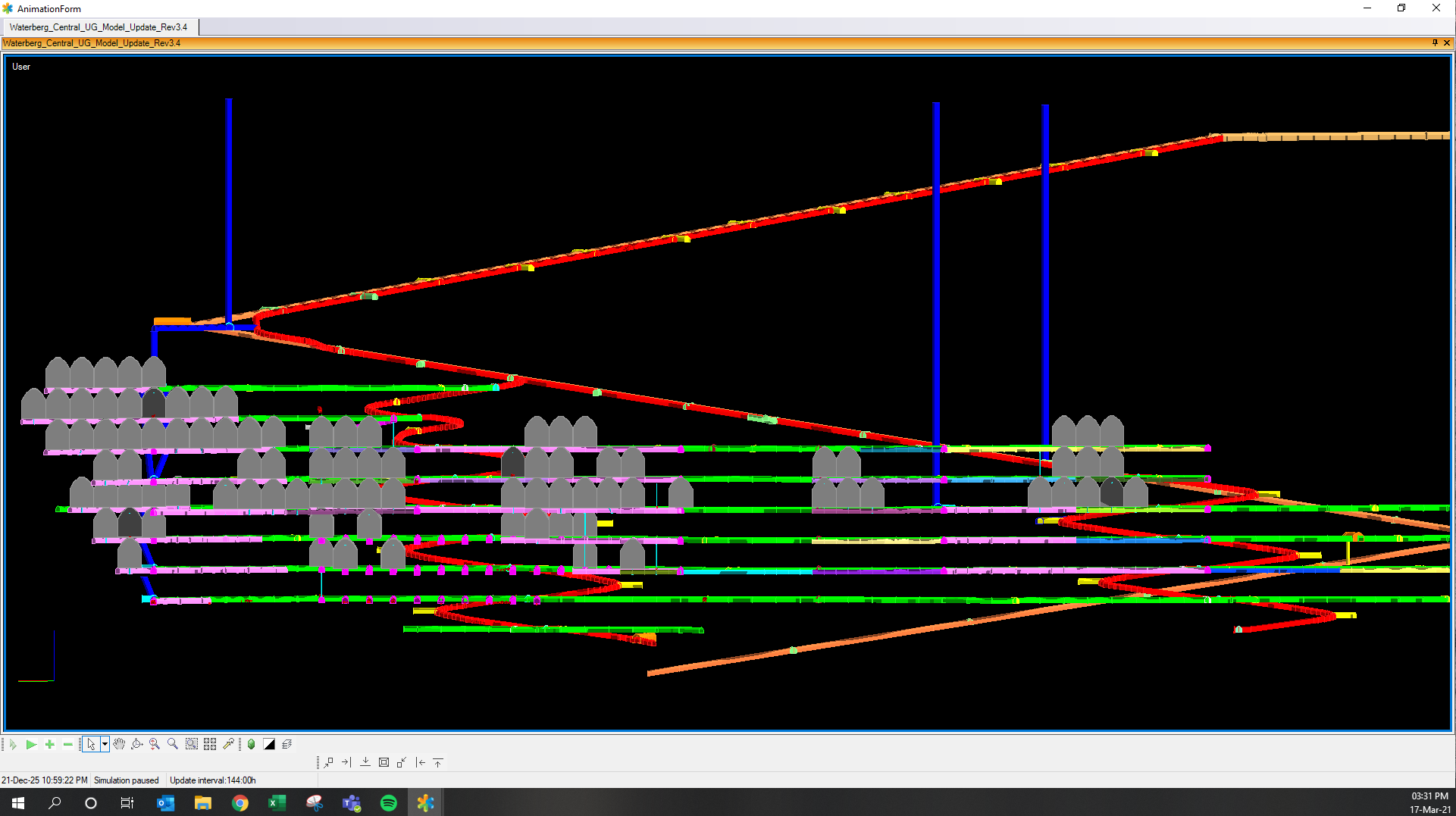 Mine development, ramp-up, and production require significant investment. Optimised resource planning and scheduling of underground mining can prove to be extremely valuable by ensuring the project is completed on time and within budget.

The model was developed to accurately establish achievable development rates, production rates, optimal development sequence, and fleet size required to ensure that the LHOS project targets are met. The model determined the maximum development rate of the declines based on the equipment fleet. In conjunction with the decline development, the SimMine® model also considered the total production build-up to two years of steady-state production. Various model configurations were tested and assisted with the following project outcomes:

The simulation model was developed using SimMine® simulation software. The information required for the trackless mining equipment and ore handling systems was sourced from the project team.  The Deswick mine design, along with various rock and face attributes such as rock densities, face height, -width, and the stoping sequence, were imported into SimMine® for each section in the layout.

The model is validated by comparing inputs to the resulting outputs for specific mining tasks (e.g. drilling-, bolting-, loading times, etc.) to ensure the behaviour mimics activities found in underground mining.  The decline development achieved its average target advance, starting higher near the portal, but reducing as the mine progressed deeper.  Figure 2 shows a dip in the middle due to the development of a large Conveyor Transfer Station with longer activity times and a resulting drop in monthly advance.

The build-up to steady-state annual mined ore tonnes is displayed in Figure 3, including ore drive and stope tonnes, initially hauled to surface and later conveyed from the respective 1st and 2nd underground tips. After the tips are commissioned, tonnes hauled to surface is as a result of tip or conveyor failures or excessive queuing at the tips, causing the haul trucks to travel to surface.

The long hole drills are utilised at an average of 95.90 % and with a stope utilisation of 49.98 %. This suggests that, if a higher tonnage target is required, an additional long hole drill would have the most impact. The haul trucks have an average waiting time of approximately 12 % of their working shift for time spent waiting at either the tips (queuing to tip or for the pecker to break large rocks) or for an LHD to load it at the muck bays.

Evaluating the mine design for the build-up phase into two years of steady-state, the model shows the target advance and tonnes are achievable and follows the ramp-up strategy to achieve steady-state.

An optimisation opportunity could be to have more than one tipping point at the underground chute locations.  This will reduce the time trucks spent waiting for the peckers to break oversize rocks and restricting trucks to tip.  The results reflect how complex mining operations can be accurately modelled by taking numerous variables into consideration and by integrating the mine design and activities into a simulation model.