Mine Access Development Simulation Through Direct Mine Design Data Integration 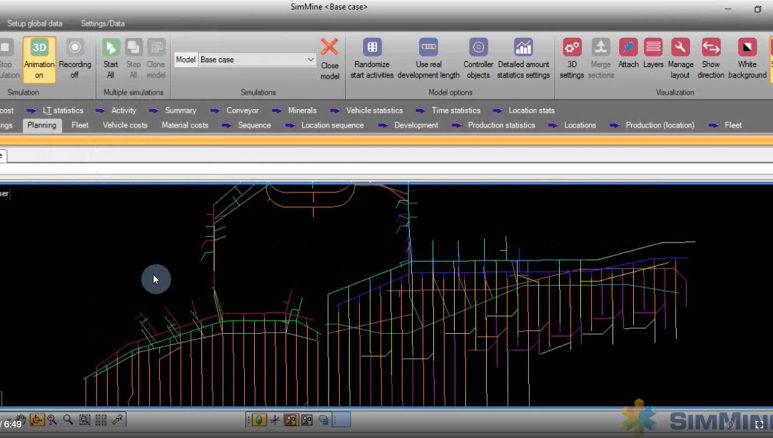 Optimised resource planning and scheduling of underground mine development can prove to be extremely valuable by ensuring the development project is completed on time and within budget.

The objective of this case study is to compare various access development options and technology trade-offs for developing the underground infrastructure from the mine portals to the start of the production development sections. The technology considerations include manual vs. automated, cutting vs. drilling and various blasting operations. Specialised simulation software is utilised as opposed to the traditional project scheduling approach of spreadsheet-based solutions. Dynamic simulation is the preferred method when evaluating complex systems because unlike spreadsheet or deterministic models, it has the capability of capturing the dynamic behaviour that is present in a real-world system.

By establishing the best mining- and technology option configuration, the Net Present Value of the project could be significantly improved. Figure 1 illustrates the mine design imported from Deswick file format, depicting the simulated access tunnels

The simulation model is developed using SimMine® simulation software. The information required for the trackless mining equipment and ore handling systems are sourced from the project team. The Deswick mine design, along with various rock and face attributes such as rock densities, face height and width are imported into SimMine® for each development section. Importing the data decreases model set-up time and the number of data transfer errors.

These scenarios are preselected by the client to distinguish any possible advantage a scenario achieves compared to another. The designed access tunnels are more than 5km in length, thus any small advantage could have a significant impact over the development duration. For the Tunnel Boring Machine (TBM), scenarios reflecting variation in the blasting schedules, crew sharing, as well as conventional versus automine shift schedules and equipment parameters were evaluated. The TBM scenarios are only applied to the initial 120m launch tunnels developed by Drill and Blast. All four drives are cut by dedicated TBMs.

The assumption is made that a 12-month manufacturing time and 2-month shipping time will be required before the tunnel start date to allow the TBMs to be available for setup once the 120 m launch tunnel has been Drilled and Blasted.

Due to the large face excavations required by the mine design, it is possible that more than one piece of equipment could be used at the face for the drilling or bolting activity. All scenarios tested are feasible in reality, although this case study does not consider the requirement of additional management when there is multiple equipment at the same face.

The model is validated by comparing inputs to the resulting outputs for specific mining tasks (e.g. drilling-, bolting-, loading times, etc.), as well as studying the interaction between equipment in the model to ensure the behaviour mimics activities found in underground mining.

A Base Case (scenario 1) is simulated to compare the performance of all other evaluated scenarios. Comparing the evaluated scenarios to the Base Case provides a good indication of the improvements and benefits obtained by each scenario. The parameters of the Base Case are as follows; 180m muck bay spacing, conventional shift schedule, a fixed blast setup, one drill set to drill the drive faces 7m and wider, and one bolter set to support the drive faces 7m and wider. For each Drill and Blast scenario the simulated duration of tunnel drives is evaluated. All scenarios have the same start date, including the TBM scenarios that succeed the Drill and Blast section.

After comparing the scenarios to the Base Case, it is concluded that the Blast-at-Will (BAW) scenarios have a clear advantage over fixed blast scenarios. When BAW is linked with the automine shift schedule (allowing for 3 hours additional work time as opposed to the conventional shift schedule) and equipment parameters, it produces the best results.

The best result pertaining to the TBM scenarios is achieved by scenario 32. Scenario 32 completed all four drives faster compared to the Base Case (scenario 1):

The results are a clear indication of the value that can be unlocked when using the appropriate data and technology solutions. This case study is a prime example of the opportunity cost and risk of using a static mine design with deterministic calculations for mine development. By integrating the mine design to specialised simulation software and performing various scenario-based analyses, the mine design becomes dynamic as the simulation outputs provide the required operating parameters for a specific design.

The results reflect how complex mining development cycles can be accurately modelled by taking numerous variables into consideration and by integrating the mine design into a simulation model. Data importation such as various rock densities and face attributes enables accurate model configuration, decreases model setup time and limits data transfer and setup related errors. Simulation models consider competition for resources, queuing, traffic, variability in process times, random breakdowns and events, and changing operating conditions over time. This variability allows for a realistic assessment of the type of development and production performance that can be expected. “What-if” experimentation can be carried out allowing different configurations and operating strategies to be analysed before the actual operation commence.